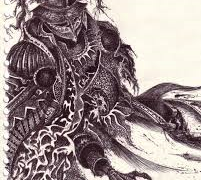 There exist beings devoid of the Valar’s grace.
Middle-earth’s majority avoid such fell sights,
As Barrow Downs and its Barrow Wights.
Yet adventurers still search this cursed place
Seeking treasure despite the wraiths they’ll face.
Spirits that animate the ancient armor of knights
Through black magic and blasphemous rites.
Trespassers inevitably succumb to their embrace.
Alters, chains, and sacrificial swords await,
To deliver would be heroes to their grisly fate.
Within mass graves will their remains be crammed,
Their souls forever condemned to this ghost-lit hell.
Conscripted into a growing legion of the damned,
A shadowy evil only the daystar’s light can dispel.