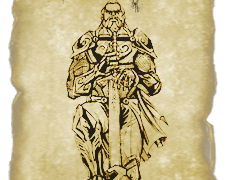 Reginald sensed he was being followed and forced his stride to remain relaxed. He pushed on through Leipzig’s crowded marketplace with the intent of leading his foe into a deserted area. The knight couldn’t simply dispatch the cultist in the open – not without being thrown into an Imperial jail. So he waited for his chance to strike.

The air was thick with smells of roasting meats and sweaty peasants. Merchants busied themselves with hawking wares or crafting new goods for sale. Drunken men careened through the crowds, their faces red with laughter and intoxication. Due to the utterly polluted status of its water supply, Leipzig’s population predominately drank beer. So this was a common enough sight.

Given its location on the eastern frontier of the Holy Roman Empire, Leipzig was different from most Imperial cities. Many of the citizenry were still typically German in appearance: Tall, broad shouldered, and crowned with blonde manes. However, there were many foreigners here. People of Hungarian decent were prevalent. Their long dark hair and thick mustaches were distinctive. The same could be said of the olive skin of Italian merchants or the high cheekbones of Polish craftsmen.

His eyes continued to scan the crowd as he moved. The man who still trailed behind might not be alone. A constant state of paranoia had filled Reginald since entering the sprawling city. Anyone he passed could be another cultist under Maxwell Shrieber’s command, another enemy seeking to bury a dagger into his back. Reginald did his best to remain inconspicuous.

But this was not without difficulty.

The infernal aura of his damnation grew stronger with the years. People he passed sensed there was something wrong with him. He ignored scowls of disgust and looks of suspicion shot his way. He kept moving. Staying still only emboldened those with a penchant for violence or curiosity.

Reginald weaved through vegetables stalls and down an alley leading away from the marketplace. He strained his ears. He heard the soft; telltale step of his would be assassin still behind him. Reginald exited the alleyway, but hugged the wall by the entrance a few moments before stepping back in.

Reginald eyed up his opponent. The assassin had dark hair and an ill-trimmed beard. But otherwise, he was unremarkable. No ritual scarring, tattoos, or ornaments revealed the man’s allegiance to Shrieber. Only the manic and obsessive look instilled within his eyes.

The man skidded to a stop and frantically reached for a weapon within his cloak.

Reginald lounged forward. The cultist tried to plunge the weapon into the knight’s abdomen, but Reginald sidestepped. He was able to grasp the assassin’s hand that  held the dagger. However, the left hand streaked in and connected solidly on Reginald’s chin. The two men slammed each other against the narrow alleyway walls as they struggled for position and leverage. The bearded assassin was undoubtedly faster, his gloved fist continued to pepper Reginald’s face. Then the assassin tried to thumb out Reginald’s eye. But the knight was much stronger. He shoved and slammed the assassin up against the wall.

Finally, Reginald felt the satisfying snap of the assassin’s right wrist breaking. The dagger his enemy held fell to the street. Reginald’s assailant was hardly finished and tried to slam his knee into the knight’s groin. Reginald shifted his hip and blocked the strike. The desperate cultist kept his knee wedged between him and Reginald as he deftly retrieved another dagger with his left hand. The knight deflected a hacking slash aimed for his face with his forearm. Reginald felt the weapon’s serrated edge digging into his flesh, but did not panic.

Reginald released his grip on the assassin’s broken wrist. He then shifted closer and grasped the dagger’s hilt with both of his hands. He used his broad shoulder to pin the assassin against the wall helplessly as he drove the weapon towards his enemy’s throat. Reginald’s opponent knew he was in peril as the dagger’s tip hovered over this windpipe.

“Where is Shrieber?” Reginald demanded.

The cultist’s snarled defiantly and struggled to free himself from Reginald’s grasp.

The dagger  moved ever closer and Reginald struggled against the urge to kill, “Where is Maxwell Shrieber?”

A deranged smile crossed the assassin’s face. Before Reginald could react the cultist stopped resisting and instead helped drive the dagger into his own throat. The knight dropped the dying fanatic in disgust. He did his best to ignore the maddened laughter that gurgled from the dying man’s esophagus as he walked away.

Reginald made sure no one witnessed the violent skirmish before returning to the Skewered Pig Inn. A rat hole he used as his base of operations within Leipzig. Having to dwell within the city’s wretched underbelly was demoralizing. Reginald struggled to hold onto the memory of Nadya as the days passed on.

The young Romani woman had stirred feelings within his heart again. Something he thought lost after the past five years. Watching Nadya leave tormented him. He wanted her to stay by his side. But death was the only outcome for her if she remained there. Though she did not wish it, she was safer with her people who traveled east.

Reginald longed for her embrace as he walked through the door of the skewered pig. He ignored glances from the degenerates who eyed him from the bar’s counter. He continued up the stairs and towards his room. An increasing fury was beginning to take hold of the frustrated warrior. He had survived yet another skirmish with one of Maxwell’s men and was no closer in locating the satanic alchemist.

Bridgett, his warden and sometimes guardian angel, had prophesized that Shrieber planned to make his last stand in Liepzig. How the angel knew this for certain was a mystery Reginald distrusted. The knight often wondered just how much she kept hidden from him in the attempts to manipulate his actions. And then there was the damnation itself.

Reginald knew he was partially responsible for the death of Thomas Beckett, The Arch Bishop of Canterbury. He understood how much Beckett’s death cost the Catholic faith. What he couldn’t abide was his sentence. With only five of his fourteen years served he was already becoming altered by his damnation. Reginald’s nightmares were becoming more frequent and he now suffered from bouts of rage he struggled to control.

The knight entered his room and sat down wearily. He inspected his sword. The blade was made whole once more by Bridgett’s power. Its surface remained scarred where the shattered pieces were fused together. An empowered feeling filled Reginald whenever he held the broadsword his father gave him. He wandered what his father would think if he could see his son now.

Reginald pushed these dismal thoughts aside as he gradually became aware of Clemence’s presence. The ghost girl materialized within the center of the room. Clemence gazed over Reginald’s bruises with a concerned look on her face.

“You have blood on you again,” She observed.

Reginald looked at his feet and noticed  his blood stained boots. He shrugged apologetically and sheathed his sword. Clemence was a spirit, but in Reginald’s eyes she was a child with no business being tangled in his violent life. It was bad enough that he failed to save her without being reminded of this fact every time she appeared. Reginald only wanted her to pass on, leave him and take her place in heaven. He sighed wearily before responding to her.

“Another fanatic. This has become a war of attrition. Eventually Shrieber will be forced to come out of hiding, because he’ll be the only one left to kill,” Reginald chuckled.

“No one will tell you where he is, will they?” The girl asked.

Reginald shook his head. The fanatics Schrieber sent after him were too devoted to reveal his location. And those nobles within Leipzig that Reginald suspected of being tied to the cult leader were too protected to confront directly. The aggravation of the situation wore on the knight.

“I need to be able to get close enough to one of Schrieber’s men in order to find where he’s located. The problem is that he’s warned half of Leipzig about me. I can’t make a move without the city guard coming after me,” Reginald growled.

“I could help,” Clemence offered.

Reginald was about to refute her outright, but stopped. Clemence could enter the estate of the noble he suspected without fear of capture or death. Reginald should have realized this earlier and taken advantage of the ghost girl’s condition. But his wish to limit Clemence’s involvement in his quest blinded him. He needed her help now. No matter how uneasy it sat with him.

Reginald looked Clemence over. She shimmered ethereally before him. An unearthly breeze stirred her ragged and gossamer clothing. Her cherubic face looked upon him with excitement.

The knight stared at the ghost girl intently  before he responded, “There’s a noble by the name of Baron Kholler. What information I’ve managed to gather points to this man being tied to Schriber’s cult. Kholler’s manor is three-story estate by the merchant’s district. A banner of red boar is posted in front of the building.

“I’ll find this Baron and where the alchemist is for you, Reginald. You’ll see!” Clemense vowed.

Before Reginald could say another word, she vanished from the room.

The above excerpt is from the first chapter of A Shadow Beneath Leipzig. The fifth installment in the ongoing series I’m writing. This was an ambitious and difficult story to craft. I basically crammed a novels worth of intrigue and character development into a twenty page short story. There were several reasons why I felt this was necessary. 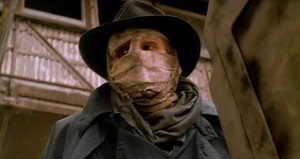 I had mentioned the villain of this story in the previous installment, The Caravan and The Cannibals. Reginald was ordered to assassinate Maxwell Shrieber and had pursued the daemonic alchemist across the Holy Roman Empire. It took a tribe of bloodthirsty cannibals to delay him. I tried to generate a bit of hype for this character.

Shrieber is a strange combination of a medieval Moriarty and Sam Rami’s Dark Man. His appearance is that of a plague doctor. This garb is not period accurate, but it was too interesting to pass up. He’s another villain with a semi-sympathetic back-story. He’s been wronged. He wants revenge. But unfortunately, Shrieber is unhindered by a conscience. And he’s not the only villain in this story…

Another key storyline involved Clemense. The ghost girl has been a reoccurring character since Reginald’s second adventure – The Lost Children of Guérande.  Her past was rather vague along with her reasons for traveling with Reginald. The relationship between these characters was largely unexplored. 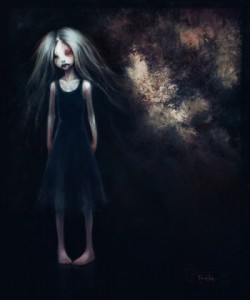 A Shadow Beneath Leipzig answers a lot of questions regarding Clemense’s past. I did my best to let the ghost girl shine. She uses an interesting new power that I hope to develop over time. The relationship between ghost and knight grows more interesting by the story’s conclusion.

It was fun using an urban setting for once. The majority of Reginald’s adventures take place in remote area’s. Using a large medieval city like Leipzig helped create tension. With streets filled with potential killers – how can anyone pick out friend from foe? Shrieber insures there’s an eager cutthroat waiting for Reginald around every corner and darkened alley.

Being honest – this story suffered from some setbacks. There were several stoppages that went for the better part of weeks. The development I put into the characters seemed forced given the short story format. The ending will also come across as controversial to some. So there you have it. You’ll know some of the back story and process that went into this tale when it finally gets released.