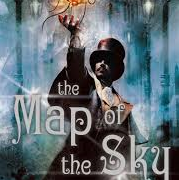 The Map of The Sky is Felix J. Palma’s sophomore outing and his sequel to The Map of Time. This novel plays out in a quirky fashion. It begins like a thriller reminiscent of John Carpenter’s The Thing and Dan Simmon’s The Terror.

The story focuses initially on the crew of the Annawan. This ship was on a mission exploring the artic circle when an extraterrestrial craft crashed landed nearby. As expected, there is a survivor within the spacecraft that begins killing the doomed explorers. Though the multiple conclusions to this struggle on the ice is initially baffling…

Part two of this story features the main character, H.G. Wells. Our plucky protagonist unwittingly awakens a dormant alien. This causes a ruinous chain of events eerily similar to his novel, The War of The Worlds. Wells is sought out by an eccentric special agent that believes he holds the answer to stopping the alien invasion. 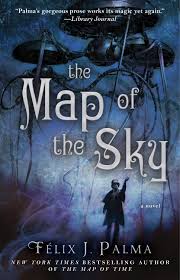 The final segment of the novel ties the seeming disparate elements of the tale together. We see the possible outcomes of this struggle. In detail. The nightmarish consequences of an alien victory are revealed, while a major development in Wells’ character finally comes to the fore.

The Pros: Palma’s narrative. Many critics have pointed out Palma’s tendency to over narrate. He does an admirable job of avoiding this proclivity in The Map of The Sky. Familiar characters return and advance the story in unexpected ways. The conclusion is exceptionally memorable. Established fans will eagerly await Palma’s conclusion to this series.

The Cons: Palma’s narrative. I love this writer’s eloquence and robust storytelling. But there are time when this works against the pace he’s established in the novel. This habit rears its ugly head in part three. There were times when I wanted to hurl the novel across the room in frustration as needless exposition nearly ground the plot to a halt.

Overall this is an amazing piece of literature. Palma’s investment in character development and plot threads continue to pay dividends. I was impressed by the elements of horror he introduced into the series and did not expect him to be so accomplished in their use. And the payoff at the story’s conclusion more than compensates for any frustration caused by his writing style.