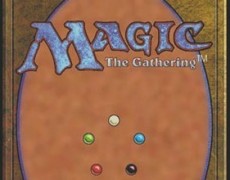 Magic The Gathering (MTG) is very near and dear to my heart. It’s synonymous with good times and good friends. This trading card game has plenty to offer for anyone. It features amazing artwork and provides countless strategies. MTG has a rich lore that encompasses an entire multi-verse. No other game can boast having so many fantasy and science fiction themes.

Richard Garfield, who was a doctoral candidate at the University of Pennsylvania, created Magic The Gathering in 1993. He worked with Peter Adkison who was the CEO of Wizards of the Coast to develop the game. Magic has created several expansions (blocks) and assembled millions of fans over the past twenty years.

MTG is appealing to me because it is a game of personality. The game utilizes a color system that determines, to a large extent, your style of play. White symbolizes protection, Black represents intimidation, Green reflects regeneration, Red is indicative of fury, and Blue signifies manipulation. Keep in mind that these descriptions are poor generalities at best! You can create many different styles of decks within a single color or countless more if you choose to mix colors.

I started playing magic during the Kamigawa block back in 2004. I loved the Asian themed characters and settings. The first deck I actually built from scratch used cards from the Onslaught block. It was a monowhite deck that utilized low casting cost creatures with flying. It included birds and soldiers that augmented each others abilities as they came into play. 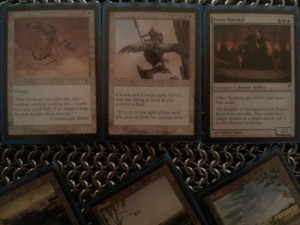 Without going into a long explanation of the rules (a labor that would take several posts), I’ll show a combination from my bird/soldier deck. Suntail Hawk is my ideal first turn drop. It’s a 1/1 flyer that synergizes well with my second turn play – Cloudreach Cavalry. With Suntail Hawk in play my Cloudreach Calvary becomes a 3/3 with flying. But this card really shines if I’m lucky enough to play a Field Marshal on my third turn. With the buffs I receive from this card, my Cloudreach Calvary is now a 4/4 soldier with first strike and flying. Not bad for only turn two.

I usual play “tribal” decks like this. Being able to amass armies of mythological creatures and then unleashing them upon my foes is quite enjoyable. And that’s what makes MTG great. The variety and ability to choose cards to suit your style of play. For these reasons I have played MTG for the better part of ten years now. While playing Magic I have had the opportunity to meet new friends and enjoy the company of old.

Here’s to another ten years.