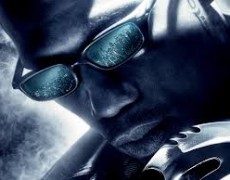 Why does Marvel’s first successful trilogy get such little recognition. I asked myself this question after recently watching all three movies. I bought the trilogy for a lousy $10.00 at Wal-Mart. I wasn’t disappointed.

The Blade movies were edgy and action packed.  They were produced by Amen – Ra films. This was a production company created by Wesley Snipes and the movies were distributed by New Line Cinema. This combination worked well to provide sufficient amounts of horror and action given the subject.

Blade is the trilogy’s titular character. He is a vampire half breed whose mother was bitten by a vampire while he was still in the womb. Blade benefits from vampiric strength, agility, and regeneration. In addition he is not susceptible to sunlight. This immunity earns him the moniker of Daywalker. 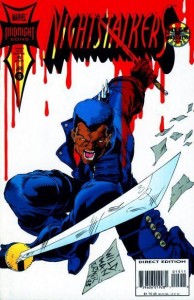 Superhero films are only as good as the actors cast for the roles. Need I remind anyone of George Clooney’s rendition of Batman? This is why Wesley Snipes was the perfect choice to portray the brooding bloodsucker. During his appearances in Marvel’s Nightstalkers, Blade is depicted as being severe and unforgiving. Snipes does an amazing job staying true to this throughout the trilogy. His performances captured Blade’s torment caused by being trapped between the worlds of the living and undead.

Another reason why Snipes was so successful was the physicality he brought to the role. Wesley Snipes is a black belt in Shotokan Karate and has studied various other forms of martial arts. He performed many of the trilogies stunts and fight scenes himself. I sincerely doubt any other actor at the time could’ve played this part better.

The Blade movies were great adaptions. They featured a number of good actors like Ron Perlman, Ryan Reynolds, Kris Kristofferson, and Parker Posey. The second film was directed by Guillermo del Toro. We even get to see Dracula at the trilogy’s conclusion. This is not to say that this series was without fault. Blade’s final outing was the weakest of the three. This remains a persistent problem for Marvel as the Spider Man and Iron Man trilogies suffering the same fate.

But there is no denying the fact that Blade was the first Marvel Character to be successful at the box office. The trilogy grossed over $414 million dollars without the benefit of being produced by Marvel Studies or enjoying the media backing their releases receive now. So why doesn’t Blade enjoy the notoriety he deserves? 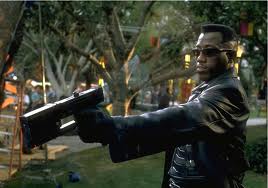 There are a number of reasons. Though vampires have consistently been popular, Blade was never a top draw for Marvel Comics. Wesley Snipe’s legal woes have also contributed to the difficulty in celebrating  Blade’s contribution to Marvel’s growing prosperity. He was  convicted of tax evasion and sentenced to three years in prison. This is unfair given the fact that Robert Downey Jr. also has a criminal record, but has become Marvel’s top draw. This movie series deserves redemption and it seems after nearly a decade it may happen. Marvel has regained the film rights to Blade.

I’d love to see the Daywalker dusting vampires once more.