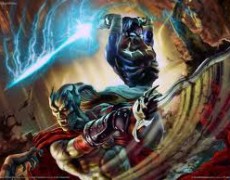 The Legacy of Kain/Blood Omen series was before it’s time in many respects. But its greatest contribution to the video game industry was its emphasis on voice acting. This was an underdeveloped aspect until this series hit the scene. Games released afterwards followed it’s example and hired professional actors to voice their characters.

Great video games feature story driving characters. And few franchises were blessed with such anti-heroes as Kain and Raziel. Kain is a time traveling vampire voiced by Simon Templeman. Raziel is a vampire seemingly betrayed by Kain and later turned into a soul devouring wraith played by Michael Bell. 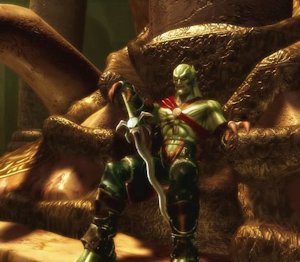 Templeman’s narrations immerse the player in Kain’s quest and growth as a vampire. An amazing voice was needed to embody this dark story. Templeman’s performance in Blood Omen is inspiring. His dialogue and descriptions of Nosgoth lays the foundation for the entire series.

Kain’s destiny is tied to the Pillar’s of Nosgoth, magical artifacts that keep the infernal influence of the Hylden from entering the world. By the end of Blood Omen – Kain is given a horrible ultimatum. He can sacrifice himself to restore the Pillars. Or he can refuse and condemn them and all of Nosgoth to ruin.

“I knew what ominous hour this was in Nosgoth’s history. For here was the event that shaped my entire existence…I had cast my fate, refusing the sacrifice, damning the Pillars, and founding my doomed empire upon their ruins.” -Kain 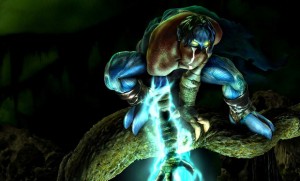 Centuries later, Kain rules over the wasteland that Nosgoth has become. Raziel was a lieutenant under Kain’s command. This was until Kain ripped the bones from his wings and  cast him into The Abyss.  This was a giant, caustic whirlpool within a  lake of the dead.  Raziel somehow survived five hundred years of being submerged beneath its waters. He emerged as a grotesque wraith with a ravenous hunger for souls.

“Tumbling, burning with white hot fire, I plunged into the depths of the Abyss. Unspeakable pain…Relentless agony…Time ceased to exist…Only this torture…and a deepening hatred of the hypocrisy that damned me to this hell.” – Raziel

Hearing Michael Bell recite this line aloud was an epic moment in the series. He does a brilliant job voicing Raziel’s self loathing concerning his deformity. Gamers empathized with Raziel and readily colluded with him to ensure his treacherous brethren were slain.

My favorite moment of the entire series was when Raziel time traveled to early Nosgoth and confronted Kain at the uncorrupted Pillars. Templeman tells Kain’s side of the story in such a compelling manner that it stays the vengeful hand of Raziel. But this isn’t without reservation. Bell is true to his role and verbal demonstrates Raziel’s reluctance in letting Kain live. And we fully understand his need to justify Kain’s murder after witnessing his torment.

The Soul Reaver/Blood Omen series raised the bar in video game story telling. As the genre grew increasingly cinematic –  quality voice acting became a necessity to keep gamers engaged. This series’ efforts ensured hokey voiceovers were a thing of the past. Simon Templeman and Michael Bell can’t get enough credit for making this happen.