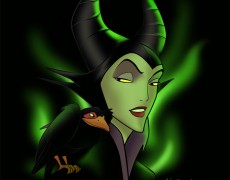 Disney villains rarely fill anyone with fear. Jafar from Aladdin, Queen Grimhilde Wicked Witch in Snow White and the Evil Step-Sisters from Cinderella are all so self-righteous and vain, you needn’t worry about them, they’ll eventually all destroy themselves. But in so far as the classic Disney films, the villain in Sleeping Beauty, Maleficent is not to be toyed with and someone to be feared. 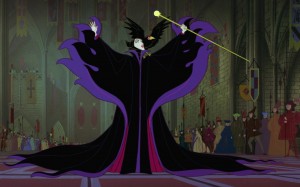 First and foremost, she carries herself with pride, caring about her place in the community. She is offended by not being invited to the biggest celebration in the kingdom. That’s not evil, that’s normal. However, when the fairy Merryweather tells her she was not wanted, she is shocked and turns to leave. But before she does, in a show that she “bears no ill will,” she places a gift and a curse on the baby Princess Aurora.

The princess shall indeed grow in grace and beauty, beloved by all who know her.

This is indeed a gift, we’re all aware how closed off royal bloodlines can be, so to have this guaranteed is a great thing to have. She continues…

But… before the sun sets on her 16th birthday, she shall prick her finger, on the spindle of a spinning wheel – AND DIE!

This is a curse matched by no other. Maleficent is not killing the princess now, something she could have easily done, but she’s going to allow the King, Queen and kingdom to watch Princess Aurora grow with “grace and beauty” which will make her even more “beloved by all who know her.” Then after the princess is loved by all, and only then at the tender age of 16, she will die. 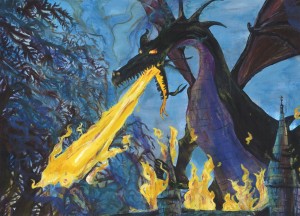 Maleficent Dragon by elphie393 on deviantART

That’s not only evil, that’s downright torturous! But her quiet confidence isn’t the only reason she’s to be feared as the October Villain of the Month. She can turn into a dragon.

Yep, when the going gets tough, Maleficent can turn herself into a monstrous fire-breathing, black and purple, dragon. This character trait alone, overshadows her ability to conjure nature by sprouting thorns from the ground at will and manipulating the winds and the rain, because she can turn into a dragon. Let’s also not forget what she tells the prince…

Now, shall you deal with me, O Prince… And all the powers of Hell!

That’s definitely not something to be taken lightly.

I know, I know, she gets killed by the better than good, heroic, shining white knight, Prince Phillip but all Disney villains are doomed, that’s what makes them Disney villains.

Agent Palmer is someone who will never shy away from the word “geek” and his blog tagline fits, “Of all things geek, I am…” he boasts.
www.agentpalmer.comAbout the Guest