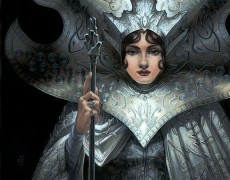 R.Gallegos is a professional artist / illustrator based in New York City. He works primarily with acrylics and oil paints. Mr. Gallegos has produced hundreds of illustrations. Many of which were used within the fantasy gaming genre. Some of his clients include Magic The Gathering, World of Warcraft, and Dungeons and Dragons. His work has also appeared in the Realms of Fantasy magazine and as cover art for the novel, “Redemption: the Quest to Recover the Book of Life.” 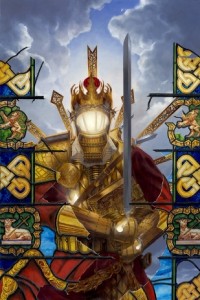 R. Gallegos enjoys variations of similar themes and has stated his pieces often “have conversations between themselves.” His favorite place for inspiration is the Art Renewal Center. A nonprofit educational foundation dedicated to the renewal of classical training and the re-appreciation of traditional art.

R. Gallegos continuously strives to improve his craft as well as himself. He’s run in a marathon and is an avid traveler. Mr. Gallegos is also a voracious reader and a bit of a linguist having learned Spanish and currently studying Japanese. He has published a beautiful 64-page sketchbook entitled, “Dreaming in Black and White.”

Mr. Gallegos has an impressive blog you can follow: http://gallegosart.com/

Also make sure you visit his gallery at deviantArt.