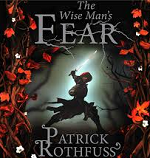 The Wise Man’s Fear by Patrick Rothfuss is a hefty and impressive sequel to his best selling novel, The Name of The Wind. We resume the story with Kvothe continuing his education as an Arcanist at the University. He’s still seeking credible knowledge on the Chandrian, demons responsible for murdering his family.

This outing expands the scope of the tale. Events take place outside of Imre and the University. Given how much ground needs to be covered by day three (Chronicle 3), I was surprised half the story took place in these settings. But Rothfuss makes up for lost time, though in a quirky, tongue in cheek manner. In the chapter entitled: A Brief Journey, Kvothe simply summarizes his voyage to Severen.

“There was a storm, piracy, treachery, and a shipwreck. However, as these events have little to do with the heart of the story, I must pass them over in favor of more important things.”

What a funny way to advance the plot. 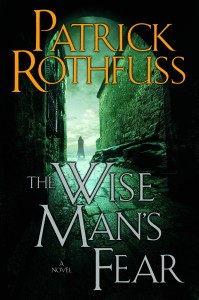 Kvothe arrives in the city of Severen and immediately begins working for the Maer. During the course of his service he runs into Deena again. More questions are brought up over her mysterious patron (I bet he’s a Chandrian). Kvothe later leads a mercenary band, learns the martial arts from the Adem, and has a brief tryst with a primal sex goddess.

Throughout the Wise Man’s Fear, Kvothe continues to display the clever and impetus nature he established in the first book. His character gains a measure of patience, but his temper and pursuit of knowledge inevitably lead him towards tragedy. The literary device of the Cthaeh seems almost unnecessary given the established faults of Kvothe.

After reading this story, I can’t help but think that the King Killer trilogy will be the setup for another series. There is just too much that needs to be resolved in the next novel. How exactly does Kvothe get expelled from the University? Does he manage to exact some revenge on the Chandrian? How does he start the war? Any one of these subjects would be enough to fill a novel of its own.

Either way, I am eagerly awaiting the third installment.