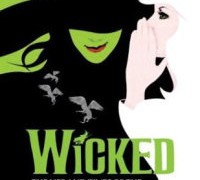 Gregory Maguire’s Wicked is a victory in revisionist fictional writing. The novel is based on the origins of the Wicked Witch of the West. The author takes his time in establishing his interpretation of OZ. In wonderful detail we are told of the different races such as the Munchkin Landers, Quadlings, and Arjiki. Maguire even goes so far as to create a volatile political climate. The Wizard of Oz is portrayed as a cruel dictator determined to strip away the rights of Animals (not to be confused with animals). These are talking beasts who strive to be first class citizens. But the real fulcrum on which this story rests is the complicated character of Elphaba – who eventually becomes the infamous Wicked Witch of the West.

Elphaba’s childhood is disastrous. Though a large part of this is due to her being born with green skin, her parents are absolutely dysfunctional. Despite these problems – Elphaba’s personal actions as a young student are surprisingly moral. She openly questions teachers at the School of Shiz when they support the Wizard’s anti – Animal rights propaganda. She even ends up joining a freedom fighter movement – though this ends unsuccessfully and with the death of her only lover.

What irks me about Wicked is how purposefully anti-climactic it was at times. I realize this was the writers intent to create mystery, but it borders on being infuriating. We are never really given any insight to the movement Elphaba was involved in nor was there an immediacy with its failure. When she seeks forgiveness for the affair with Fiyero, events unfold in such a way as to prevent the suspenseful moment from happening. Even her death at the hands of Dorothy lacked poignancy. Yes. We all know the Wicked Witch dies at the end of the story – but I didn’t feel Maguire’s novel owns that moment.

But again – what carries this story is the precocious, spiny, and endearing character of Elphaba. Wicked has many brilliant lines of dialogue and internalization. This was the main reason this novel was so easily adapted into a Broadway musical. Wicked is an entertaining read and deserves its place beside L. Frank Baum’s original work.