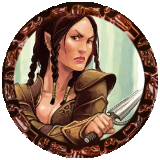 Stars twinkled brightly in the clear Neverwinter night sky. The trees swayed in a steady breeze that cooled Tasoula’s face and hands. The halfling looked up at the waxing moon hanging over the outpost. Its light briefly chased away the shadow her cloak cast on her face. It was a beautiful night for a heist.

Like most of her kin, Tasoula’s features were usually cherubic. However, her face was now a mask of concentration as she observed her objective. With its decrepit central tower partially ringed in half toppled walls, the outpost was little more than a ruin. Still, it served as a lair for the men gathered here. If discover and cornered they wouldn’t hesitate in killing her.

Especially since the rogue was hired to reclaim an heirloom they’d stolen from her wealthy benefactor. Through various contacts within Neverwinter, Tasoula’s guild had located the whereabouts of the heirloom. She was then assigned to recover it. Given the clandestine means chosen to reacquire it, the heirloom was certainly of questionable origin. Why hire a thief when one could afford a small detachment or Neverwinter guards or mercenaries? Suspicious indeed.

But the large purse of gold Tasoula received and the promise of more were too enticing for the rogue to turn away. A mischievous grin flashed across her face. With a shortened stride, a lightened step, and the night wrapped about her – Tasoula made her approach. She was a shadow that spilled softly against a section of ruin. From her concealed position Tasoula peered into the illuminated courtyard.

Gathered in the enclosure were two well-armed fighters. They guarded a door into the tower. They both wore scale armor and long swords on their hips. The uniformity of gear meant this was a team of professionals. Tasoula’s sword arm was skilled, but overcoming such odds was unlikely. Besides. There was always an easier way.

Tasoula took a moment to study the layout of the enclosure and the position of the men. She then noted the course of a wall that connected to the tower. Up there was another door leading into the dilapidated structure. But it was only accessible if she climbed atop the wall without being seen.

Tasoula unsheathed her sword. She smacked the weapon noisily against the rubble she hid behind. With his weapon drawn, one of the fighters immediately moved towards her position. The second stayed back. He hefted a heavy crossbow and leveling it towards the sound’s location. Tasoula was already moving though, slipping off to the side as the man pressed forward guardedly. She came to another gap in the wall; the crossbowman still covered the fighter patrolling the edge of the enclosure.

Tasoula continued to move silently along the wall’s sections. She kept ahead and just out of sight of the guard who still investigated the disturbance. The rouge moved faster, knowing she needed to ascend the wall before she was discovered or the guard returned to his post. Tasoula’s short fingers found handholds and she deftly climbed the wall’s rugged surface without a sound. The halfling immediately lay flat atop it. She took deep breaths to steady herself and then crawled to the edge, looking down into the enclosure.

The patrolling guard had returned and the other had relaxed his posture. The loaded crossbow rested by his side. The two conversed and Tasoula took the opportunity to crawl along the wall into the concealing shadows the tower cast. She reached the wooden door and slipped into its arch unseen. But she wasn’t home free yet. Another man could be on the other side of the door. Tasoula pressed her ear against the wooden surface and listened for several moments. She then tried the door and found it locked.

Unfazed, the halfling searched her cloak for her lock picks. She then reached into her studded leather shirt and pulled out a small gold locket. In its center was a crystal she squeezed tightly in her diminutive fist. A soft light soon emitted from its center. Tasoula could now see the cast iron lock in front of her. She went to work. Dexterous digits employed the picks with little effort and the lock gave way.

Tasoula eased the door open and peaked into an empty corridor. Satisfied that no one was nearby, she entered and closed the door behind her. She kept her sword drawn as she moved silently down the short corridor. Tasoula heard banter of men below and knew no one was aware of her presence yet.

She saw a rickety staircase and climbed the steps warily. The cushioned souls of her boots tread silently upwards. Tasoula’s head was on a swivel. She looked behind her and ahead constantly. The rogue reached the top of the tower and halted her advance. Danger. Halflings could sense when it was close and Tasoula gripped her sword tighter as she moved forward.

The top of the tower was a single room used as living quarters for the men below. There were beds covered with various animal skins. Crude wooden chests and barrels lined the walls. The room was surprisingly clean and organized. Again, another sign that these men weren’t simply bandits. She moved towards a chest at the far end of the room determined to find the heirloom and leave without detection.

A polite cough caused her to turn around. In a small alcove, just to the side, sat a man with his back to the wall. The fighter wore a dark green tabard over scale armor like the other men. A large book lay flat on his lap and he wore a quizzical smile on his face. Given the angle, Tasoula couldn’t have seen the man upon entering the room. But the rogue had been careless. She was too quick to assume the room was empty.

“Well, was there something I could help you with?” The man asked amicably.

He wasn’t scared. If anything he seemed amused. A reaction Tasoula found insulting.

“Where is the heirloom?” Tasoula demanded, her sword pointed towards the fighter.

The fighter smiled. He placed the book on the small end table beside him. Nonchalantly he stood up and gripped a sword that had been leaning against his chair. The man calmly studied Tasoula’s reaction to this. Sized her up.

“I’m sorry, but I can’t help you. I can tell you that staying here is not a good–”

Tasoula didn’t let him finish. She lounged towards him swiftly, her sword swept in towards the fighter’s kneecap. The man parried the blow away and retaliated with a telegraphed downward chop that Tasoula blocked. Her jaw clenched in effort as she held the block with one arm. Her free hand pulled out a dagger as she spun closer, attempting to gouge the man’s knee. The fighter backed up a step and clutched Tasoula’s forearm. He tugged on the limb and unbalanced the rogue who stumbled forward. Tasoula quickly regained her balance, but not before he pulled her hood down.

“I never imaged my would-be cutpurse would be so pretty,” the fighter taunted.

Tasoula stood revealed and humiliated. She attacked in a flurry of strikes. Sword and danger sliced through the air, attempts made to incapacitate her opponent. But the fighter blocked or sidestepped her attacks, then counterattacked with halfhearted strikes. He was playing with her! He hadn’t even sounded an alarm or called for help. Though sounds from their “battle” were heard and she could hear the other men approaching.

She had to retreat. But she wouldn’t be leaving empty handed. She backed up and reached into one of her belt pouches. She feinted to attack once more, but instead rolled a smoke bomb into the middle of the room. The fighter backed up warily as thick jets of fog were released from the small wooden barrel that rolled across the floor. In a moment visibility was lost and Tasoula took the opportunity to claim her consolation prize.

Once Tasoula had escaped the tower and ensured no immediate pursuit was forthcoming, she took a minute to relax. She pulled her hood down and let her long, raven black hair down. Her face was flushed with frustration. Never had she been so embarrassed! That fighter, that man, could have defeated her effortlessly. But at least she had gotten a measure of satisfaction.

Tasoula gazed upon the book she’d stolen out of the outlook. She immediately knew it was of some value given the ornate binding and how that damned fighter had gently placed it on the end table before belittling her in battle. The halfling would find out if its pages contained any knowledge worth selling or perhaps in barter for the heirloom. If anything, she hoped it provided her an opportunity to cross swords with that man again.

This was my entry into the fantasy contest, “Tasoula the Rogue”. The contest is being held by the Realms of Fantasy group in deviantArt. The contestants must either illustrate or descibe the character given what details the creator provided.

I’ve included the link to the contest here.