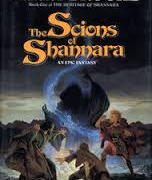 Terry Brooks is widely viewed as the literary successor to J.R.R. Tolkien. There were many parallels between his Sword of Shannara trilogy and the Lord of The Rings. The Scions of Shannara is book one of his epic Heritage of Shannara series. These books cemented Brooks’ own literary legacy. They are utterly riveting and brilliant works that step out of Tolkien’s shadow.

The Scions of Shannara takes place three hundred years after the last great battle against evil in the Four Lands. It is a dark time. Magic is fading from existence, the elves of Arborlon have vanished, and the oppressive Federation has filled the power vacuum. The Federation is a militant order of men looking to rule over the Four Lands and round up the few remaining magic users.

With this bleak background established, we are introduced to the main protagonists Par and Coll  Ohmsford. Par possesses the magic of the Wishsong. He can create vivid illusions with the sound of his voice. He uses this ability to recount the tales of his ancestors and the importance of magic.

Which makes him a prime target for the Federation.

Par and Coll are nearly apprehended by Rimmer Dall, the enigmatic leader of the Seekers. An SS like organization within the Federation. While fleeing the Seekers they stumble upon a Shadowen. An evil spirit that passes from body to body – always with the intent to possess those wielding magic. The Ohmsfords manage to survive the encounter with unexpected aid. Par seeks solutions to the Shadowen and Federation by finally heeding the summons of Allanon’s Shade.

The dead druid(Allanon) had appeared in Walker Boh and Wren Ohmsford’s dreams as well. The descendants of the Elven House of Shannara are filled with misgivings when they meet this specter. In life Allanon withheld many secrets when aiding their ancestors. These feelings only intensify when the long dead druid provides little answers and charges them seemingly impossible tasks… 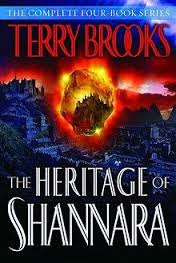 The Pros: Brooks’ world. The Four Lands are a beautiful, fleshed out fantasy world. Its cities and races have established histories. Those new to this realm won’t be lost. Brooks’ descriptions are vivid without being longwinded. You can readily visualize this world, perhaps better than Middle-earth.  The alternations between the storylines are done well, especially concerning Walker Boh’s.  This character gets relatively little time with the reader. Brooks does a masterful job of advancing his story “off screen” during the chapters he doesn’t appear in. And once more a highlander (Morgan Leah) is stealing the scenes.

The Cons: So very few. Many would still point out similarities remain between Brooks and Tolkien. But the same can be said of almost every other fantasy writer whose come after.  There are some recycled ideas. One more  Allanon  is manipulating the Ohmsfords – albeit this time from beyond the grave. Wren Ohmsford got precious little time in this novel. This is frustrating given she is one of the few female leads in the series.

Overall this is an incredible work. Elements of intrigue, horror, and magic are utilized well. Readers already familiar with Brooks’ work will appreciate how he’s changed the Four Lands since his last book, The Wishsong of Shannara. And I think that’s something readers enjoy the most about this author. While each new book advances the development of characters – its also adding to the history of this fictional world.