The Legend of Sleepy Hollow is one of my favorite supernatural stories for several reasons. It’s an American ghost story based in historical Tarrytown, New York. Washington Irving’s haunting tale is set in 1790 – shortly after the American Revolutionary War. Being a history major/nerd, I love this era. And a ghost of a Hessian mercenary who was decapitated by stray cannon fire is kinda enjoyable for me, too.

So I was excited when the Fox Broadcasting Company announced they were airing a Sleepy Hollow program. Fox’s interpretation builds upon the growing mythology of Sleepy Hollow, but contributes their own unique additions. In Irving’s classic tale, Ichabod Crane is a jittery schoolmaster trying to win the hand of Katrina Van Tassel. Ichabod is certainly not heroic, nor his motives very pure. He views a potential marriage to Katrina as his meal ticket. He is cowardly and falls victim to pranks perpetrated by Abraham “Brom” Van Brunt.

Ichabod’s origin, demeanor, and appearance are entirely different in the television show. We learn he was a soldier in the Continental Army tasked with a secret mission by General George Washington. During a battle with the British, Ichabod decapitates the Hessian, but dies of his wounds. He is later resurrected in modern day Sleepy Hollow. With the aid of Lieutenant Abbie Mills, he seeks to defeat the horseman who has returned from the grave as well. Again, this is a vastly different interpretation of  the classic story.

And that’s fine with me.

Tim Burton’s Sleepy Hollow took a similar approach. This movie was more in line with Irving’s work, but had its share of interesting deviations. Burton’s Ichabod is a constable summoned to Sleepy Hollow to investigate a series of murders. Katrina Van Tassel is re-imagined as a white witch aiding Ichabod in battling the horseman. A “whodunit” plot further gives the movie its own identity. 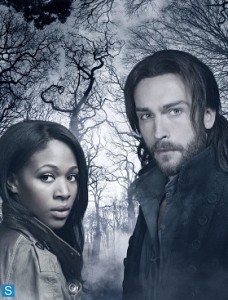 Fox’s Sleepy Hollow borrows from this established mythology  and many others. Clever dialogue and villain of the week themes are derivative of Buffy the Vampire Slayer and Supernatural. Ichabod’s man out of time milieu is reminiscent to Captain America’s and is even mentioned tongue in cheek during the pilot. Borrowing from these themes isn’t wrong, but Sleepy Hollow will need to develop its characters if its going to last.

And I hope the show is given the time and chance to do so. Shows like Supernatural, Grimm, and Sleepy Hollow are wonderful contributions to the urban fantasy genre. After years of being bombarded by god awful reality TV programs – it’s refreshing to see story driven content again.