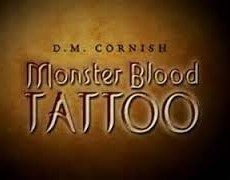 Few books are visually pleasing as Monster Blood Tattoo. D.M. Cornish has a mastery with words. His attention to era specific detail draws readers into his unique world. The novel is a wonderful mix of steampunk and Dickensesque themes.It’s a testament to the author’s talent that this combination meshes so seamlessly. Cornish even includes an “explicarium” that explains the various jargon mentioned in the novel. 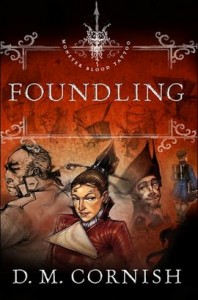 Monster Blood Tattoo focuses on young orphan, Rossamund Bookchild. A boy straddled with the misfortune of having a girl’s name. Because of this, Rossamund suffers the jibes of fellow foster children at Madam Opera’s Estimable Marine Society for Foundling Boys and Girls. He is often passed over by prospective employers or adoptive parents due to his subdued nature.

This changes when a Leer (a type of Steampunk spy) visits the academy. He offers the young protagonist an employment opportunity as a lamplighter: A specialized soldier who patrols the highways of the empire. This event sets off a chain of misadventures. Rossamund meets a colorful cast of characters as he struggles to reach the Lamplighter’s headquarters.

The broad appeal of this novel is admirable. The character designs and their various paraphernalia are well thought out. While there are genuine moments of suspense, Monster Blood Tattoo’s story stays lighthearted enough to remain a children’s tale. Older readers will become emotionally invested in the characters and Rossamund’s adventure.