There’s some recent talk on the web of another Matrix sequel. Given the disappointing conclusion to the series, its not surprising that the Wachowski brothers wanted another chance to get the story right. But there was another ground breaking movie that came out a year earlier before the first Matrix movie. A film that didn’t bow to familiar tropes at the story’s conclusion. 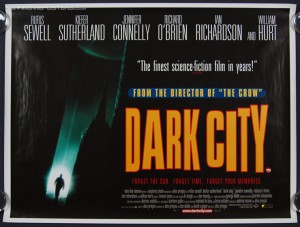 This will not be a long post discussing the differences and similarities between the movies. This has already been done. Instead, I will focus on what makes Dark City great and why it’s ending is more compelling than the final Matrix installment.

Dark City is best described as a neo-noir science fiction film. It stars Rufus Sewell as John Murdoch, a man suffering from amnesia and accused of murder. Murdoch seeks to uncover his true identity while pursued by police inspector Frank Burnstead (played by William Hurt) and a mysterious group called the Strangers.

Much like Neo from The Matrix, John Murdoch discovers reality is not what he believed. He witnesses every citizen other than himself become comatose at the stroke of midnight. It’s then he understands the Strangers are using psychokinetic powers to alter the landscape of the city and shuffle the identities of its citizens. They refer to this power as “tuning”. The only other human aware of this conspiracy is the mad Dr. Daniel P. Schreber (played by Kiefer Sutherland). 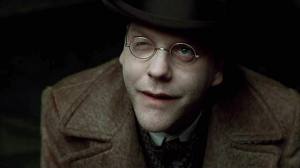 Schreber is thought to be in league with the Strangers, which turn out to be endangered extraterrestrial parasites using human corpses as hosts. Their experiments in altering the city and its people serve the purpose of discovering the human soul. The one thing that my save their dying species. John Murdoch unknowingly holds the answer to this dilemma when he displays their ability to tune. With Shreber’s aid, John realizes his full potential and has a final confrontation with the Strangers.

A great accomplishment for the film is its marriage of science fiction and noir elements. Psychokinetic powers and aliens are woven into a 40’s mystery story without seeming forced. The dialogue of the characters do not betray the period specific setting. And we can empathize with Murdoc’s quest for the truth.

The style of the movie is another winning trait. Alex Proyas listed The Maltese Falcon as an influence on his decisions with the wardrobe and architecture. The villains are garbed in black woolen coats and bowler hats. Inspector Frank Burnstead is very Sam Spade in his appearance, while Emma Murdock wears an assortment of glamorous evening dresses.

But what makes Dark City fulfilling for me was its ending. Given the 40’s influence – it would have been easy for the film to take the same route as The Matrix. Martyrdom a typical or expected fate for the protagonist. He falls in battle while defeating the Strangers and allows the rest of citizens to go on living in ignorance within the city.

But what makes this movie impressive is how it actually ends.

John Murdoc survives and becomes an empowered savior. He uses his abilities to reshape the city in his image. The movie also affirms the existence of the human soul in a way that’s romantic and utterly non- religious. Dark City’s conclusion isn’t better because it ends on an upnote. It’s superior because it allows the character to usher in a new age that’s open ended. A conclusion that Matrix fans were expecting, but the series ultimately never delivered on.