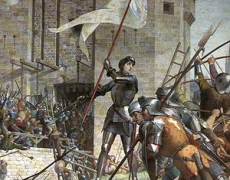 The war would be decided by the siege of Orléans,
An isolated French bastion along the river Loire.
Sought after by John Plantagenet and his forces,
English usurpers who claimed the French throne.
From a neighboring province I marched with haste,
To defend this condemned city. Prayers were spoken
As the defenders prepared to face the wrathful English.
The enemy began with a bombarded of our defenses,
As they wheeled their siege towers and ladders close.

Our battlements shattered under deafening cannon fire,
Remnants of defenders were hurled from the heights.
We retaliated with crossbow fire and vats of burning oil,
Still the English pressed on despite the losses we inflicted.
If not for the reinforcements lead by Marshal de Boussac,
The bridges leading into the city would remain intact,
Assuring the fall of Orléans and all of northern France.
Surrounded and starved, I thought of home and my love,
And all the things I’d tell her if she could hear my voice:

At night I struggle to forget the horrors I’ve seen
But within the shelter of dreams I see your face
And imagine the many steps I shall soon retrace
Through the vineyards and rolling hills of green
Towards my homeland both beautiful and serene
I’ll defeat the English, defend this besieged place
Depart Orléans and return to your loving embrace
A reunion no king or conflict shall come between

All seemed lost before the arrival of a prophesized hero,
Joan of Arc. The armored maiden destined to restore France.
I didn’t believe in miracles, but there was no denying her affect.
Once beleaguered men followed her banner into battle eagerly,
With renewed vigor our weapons struck down English biesigers.
When our forces faltered, Joan would shout aloud “Ou Nom De”
And cowards found courage they otherwise would never possess.
My arms and lungs burned with the effort in wielding my axe,
But by day’s end we’d taken the Augustines back from the enemy.

Inspired by Joan’s example, the citizens of Orléans rebuilt the bridges,
We charged across, determined to reclaim the towers we abandoned.
I sensed the change in momentum, saw fear within the eyes of the English.
We cut them down and drove their commander off the bridge to his death,
And thus men who were condemned knew a victory none could foresee.
It was the turning point in what became known as The Hundreds Years’ War.
Many a French soldier would follow the Maiden into new battles,
But I knew where I belonged and began the long trek back home.
And within my love’s arms, told her everything I’d yearned to say:

At night I struggled to forget the horrors I’d seen
But within the shelter of dreams I saw your face
And imagined the many steps I would retrace
Through the vineyards and rolling hills of green
Towards my homeland both beautiful and serene
I’ve defeated the English, defended that besieged place
Departed Orléans and returned to your loving embrace
A reunion no king or conflict shall ever come between