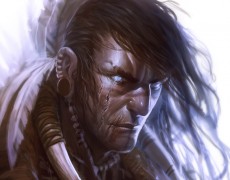 Dave Rapoza is a freelance illustrator and concept artist based in Burlington, Vermont. He did not attend a formal art school. Instead, Mr. Rapoza  mastered his craft through independent study, observing techniques used by various artists posted on art forums. After years of studying sketchbooks and taking freelance jobs, his improved talents allowed him to take on more prominent clients. 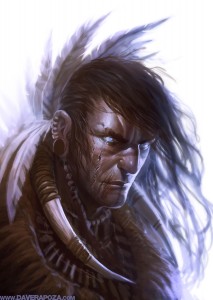 Mr. Rapoza’s work has been featured in League of Legends, Wizards of the Coast, and Bethesda. His character concepts have been used for Dungeon and Dragons as well as Magic: The Gathering. Dave Rapoza is also working on this own project entitled Skull and Shark.

The tools he utilizes for the bulk of his creations are Adobe Photoshop CS3 and an Intous 3 Wacom tablet. Art books he references and reccommends are: Andrew Loomis’ “Figure Drawing For All Its Worth”, Burn Hogarth’s “Dynamic Figure Drawing”, and George B. Bridgman’s “Contstuctive Anatomy.”

You can view more of Dave Rapoza’s work at his gallery on deviantArt.

He also has is own blog: http://daverapoza.blogspot.com/