The Land of Oz still fascinates us. Its magical inhabitants and unique landscapes continue to draw us down yellow-bricked roads of adventure. “Oz: The Great and Powerful” is the latest movie to take place in the world made famous by Lyman Frank Baum. This new movie will reveal how Oscar Diggs, a small time circus magician, becomes the great Wizard of Oz. But why are Oz and all its characters still so relevant to us? 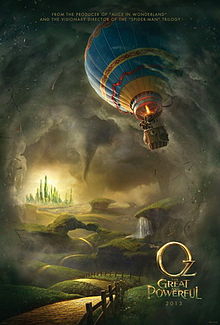 The originality of the settings is the first reason. Many memorable fantasy stories take place in a pseudo Medieval/European landscape. Beginning a tale in 19th century Kansas and dramatically shifting the setting (via tornado) is an amazing plot device. When Dorothy says, “…We’re not in Kansas anymore” – She’s really stating that she’s out of her depth. Also, Oz doesn’t borrow heavily from other fantasy settings. The Yellow Brick Road, Emerald City, and Munchkin Ville are Baum’s own inspirations.

But the characters are what keep Oz going. The influence of the Tin Man, Scarecrow, and Cowardly Lion expand beyond Baum’s novels. They’ve become popular archetypes used commonly throughout fiction. Many authors enjoy re-imagining these characters in new stories.

The Syfy channel featured a recent miniseries entitled, “Tin Man”. The show featured the Tin Man as an ex cop of Oz, imprisoned in a metal cage and forced to watch the abduction of his family. An ongoing comic series, “The Legend of Oz: The Wicked West” reinvents Dorothy Gale, turning her into gun slinging heroine. Gregory Maguire’s novel “Wicked” adds a political flavor to Oz and casts the Wicked Witch in an apologetic light.

Being able to provide something for everyone is what makes Oz stories so popular. With Sam Raimi directing and Danny Elfman scoring the film, Oz: The Great and Powerfully should be a nice addition to the Oz universe. Finally, we’ll get to learn a little more about that man behind the curtain.