This tale takes place centuries ago in a Norse kingdom known as the Reach. It is a story about the seasons and how they were preserved with an act of bravery and love.

This story, like so many tales, begins with a princess. Lifa was the only daughter of Thane Sigvard, of Rúni Reach. To simply say that she was beautiful would be a waste of time. Describing her is necessary in order to understand the extent of her allure. Lifa was blessed with long, silken strands of black hair. Her eyes were dark and mesmerizing, leaving the cleverest of men bereft of words. Lifa’s skin was lightly bronzed by the sun, and her body was a collection of curves men dreamed to run their hands over.

Word of Lifa’s beauty spread throughout humble villages, across the many fjords, and reached the frosted peaks that bordered Rúni. Atop the tallest mountain, Kebnekaise, dwelled a fearsome force, Sverre, of Kebnekaise Keep.  Sverre was the current Lord of Winter within the Reach. His power assured the harvest season ended with cold snow covering the land. For so long as someone dwelled within the Keep, there would always be winter.

From the lofty heights of his icy domain, Sverre gazed upon Lifa in all her splendor. Unfamiliar warmth stirred within his frozen heart. He desired her and something more… his freedom. Sverre set out to claim Lifa for his own. He rode a giant white Clydesdale towards the Thane’s stronghold. Lifa was just outside the protection of its walls when Sverre arrived. Overpowering swings of his great sword decimated Sigvard’s guards. With ease, the Lord of Winter grasped the defiant princess and rode back towards Kebnekaise.

Thane Sigvard was furious to hear of his daughter’s abduction. He wanted to marshal his forces and march on Kebnekaise Keep. But even with the best warriors of his meade hall beside him, overcoming Sverre’s might was not a certainty. As Thane of Rúni Reach, he needed to consider the consequences. His people would suffer unimaginable cold and death if he failed to slay the Lord of Winter. 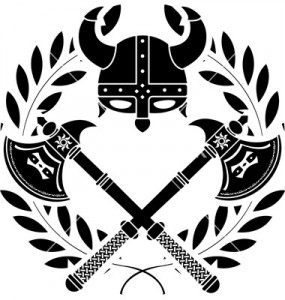 While Thane Sigvard considered how best to rescue Lifa and keep his subjects safe from reprisal, his son, Gunnar, decided to take matters into his own hands. Gunnar told no one of his plan to slay Sverre and return with Lifa. The oldest son of Sigvard, he was one of the greatest warriors within the Reach. Grim determination filled him as he donned his chainmail, armed himself with his axes, and set out in pursuit of Sverre.

Meanwhile, Lifa suffered terribly from the cold that permeated from Sverre. The Lord of Winter noticed how the princess shivered and how she refused to utter a word of complaint. Wordlessly, he stopped and allowed Lifa to dismount for a moment. His mailed hands wrapped her in his great fur cloak. Confused by the act of kindness, the princess asked:

The giant of a being met her beautiful gaze squarely before he answered, “I am not so different than most men in that I want you for myself. However, few men can ever hope to match me in battle. Perhaps by claiming you, one such man will seek me out.”

Then, Sverre told a story with ice and frost. His pale arms weaved through the air and two incredibily detailed sculptures took shape. One looked similar to the Lord of Winter -a force of nature clad in plate armor. By the heraldry she saw, Lifa could tell the other combatant was a warrior of the Reach. Both were locked in battle. Then, the ice shattered and reformed into a new sculpture. The warrior of the Reach now stood victorious over the fallen Lord of Winter.

Lifa could see the gouges and dents in the armor of the icy warriors, even their facial expressions. This was a work of art the likes she’d never seen. The greatest artists within the Reach could never hope to duplicate such detail. While the princess marveled at Sverre’s creations, he spoke in a tired tone:

“Someone must always command the chilling wind and snow. He who would slay the Lord of Winter must bear the weight of his icy mantle. And thus Kebnekaise Keep will never remain empty.”

Lifa looked once more at the sculpture and realized the victorious warrior of the Reach was none other than the current occupant of Kepnekaise Keep, Sverre.  As fearsome as his ice encrusted armor made him appear, the princess could not help but feel a pang of remorse for him. Nothing more was said as they remounted the frost-colored Clydesdale and rode towards the mountain.

Meanwhile, Gunnar followed a clear trail of frost and snow left in Sverre’s wake. The brave warrior battled through the elements as Kebnekaise gradually grew closer. His eyes narrowed with intent. When Odin and Thor looked down to see his battle with Sverre, he wanted them to know his heart was absent of fear.

The indomitable warrior of the Reach marched up the winding trails leading towards the mountain’s summit. He was battered with remorseless winds. Gunnar scaled the icy slopes, his fingertips bloody and cold. Finally, he stood atop Kebnekaise and glared balefully towards the Keep. Gunnar drew his axes from his side and prepared for battle.

While Gunnar had struggled to reach the summit, Sverre left Lifa to wander the deserted corridors of the Keep. The Princess was initially grateful to be given some privacy, but as the hours passed her thoughts returned to Sverre’s story. Lifa was still angry over being abducted. Still, she couldn’t find it within her heart to hate him.

Sverre was a tragic figure. Lifa didn’t want to see him harmed and didn’t desire anyone to die fighting over her. Wanting to be something other than helpless, she set out to confront the Lord of Winter. The princess found him on a balcony overlooking the summit and all of the Reach.

Sverre was working on another ice sculpture so intently that he didn’t realize Lifa was behind him. That was until the princess gasped in awe at Sverre’s creation. What Lifa beheld was her own likeness captured perfectly in ice. The princess of the Reach was speechless at the sight of Sverre’s marvelous work.

Sverre gazed upon his muse silently for a seemingly endless moment before he spoke, “I…did not expect you to search me out. You weren’t supposed to see this yet. It matters not. He is here. It is time.”

The Lord of Winter turned from the balcony and left Lifa. The princess of the Reach looked over the railing of the balcony. She saw a lone figure marching through the swirling snow towards her. Someone was here to save her! Lifa waited a heartbeat longer to see if she could recognize the brave warrior. When she did, her delicate hands gripped the railing, thick with icicles, in panic.

Gunnar was marching towards the Keep. It was a forlorn structure carved into the rugged surface of the mountain. Suddenly, the doors burst open with a chilling gust of wind. Out stepped Sverre, with Lifa in tow. 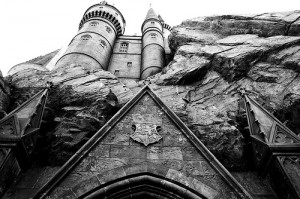 “Sverre! I am Gunnar, son of Sigvard. I seek to take back Lifa through the right of honorable combat. With no reprisal to my sister or my people should I fall. What say you?” Gunnar shouted in challenge.

“I accept,” Sverre shouted in turn, bring his great sword to bear.

The warriors set upon each other savagely. Gunnar charged headlong towards Sverre. He wielded his battle axes deftly. The weapons had cut men down like wheat reaped at harvest, and the warrior of the Reach held nothing back. The Lord of Winter countered with measured blows that drove Gunnar back. His great sword swept the axes aside. However, Sverre hadn’t managed to wound him.

Lifa had witnessed Sverre’s prowess in battle and knew the mighty being was holding back. The Lord of Winter could summon the wind and ice against her brother, but didn’t.  She then realized Sverre was losing the battle intentionally. Gunnar didn’t understand the curse. He would not cease fighting even if he knew that victory ensured his reign as the next Lord of Winter.

Lifa understood what needed to be done. The enormity of what she planned to do weighed heavily on her, yet she still stepped in between the two fighters. She offered them a compromise. She would return with her brother and stay within the Reach until fall. Then she’d return to Kebnekaise and spend the winter with Sverre. This arrangement galled both combatants, but given the circumstances, neither could refute the resolute princess.

Thus, no one’s blood was spilled upon the mountain’s summit. Nor did anyone within the Reach suffer. Lifa’s return to the Reach ensured the arrival of spring, while her departure meant the coming of winter. Sometimes this changed, given the stubborn nature of Gunnar and Sverre. Neither one was willing to part with Lifa  at times, and this meant spring or winter was prolonged. But the grudging balance continues to this day.