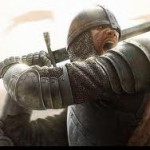 Part Four of The Lost Children of Guérande

Reginald pursued his quarry across a farmer’s field. The troll’s towering form was a dark blot in the distance. It’s long stride rapidly covered ground towards the darkness that was Brière. Reginald had wanted to intercept his foe before it reached the marsh.

But even if he did, what could he do to stop it? Reginald’s ribs still ached from being kicked and his lungs labored for breath. The knight could barely keep pace. Fighting and overpowering such a powerful creature was unlikely, but he refused to relent.

He had been sent to Guérande to discover what was taking its children. Reginald was determined to stop it.

The knight entered the marsh. He felt the ground beneath him grow more sodden as he circumnavigated stagnant pools of water. This gave way to slow flowing streams and deep running channels as high as Reginald’s waist. Cold water soaked through Reginald’s armor making his progress through Brière miserable.

In addition, Reginald’s vision was impaired by thick foliage that blocked what light the moon offered. Reginald strained his ears to hear anything above the slow churning water. He had no idea where the troll was. Under these conditions his opponent could easily step out from behind a tree and maul him. A fear Reginald fought against as he maneuvered wearily through the cold water and fog.

The knight decided to withdraw after failing to locate his enemy. There was just no way for him to track it. Reginald snarled his frustration and began backtracking out of the marsh. Startled cries of roosting crows filled the night air. Marsh water splashed loudly as a dark mass charged out of a copse of trees. The knight braced at first and then realized it was the troll. Reginald rolled to the side as the troll’s massive club whistled by just above his head.

Reginald wrenched his broadsword free of its scabbard and blocked another strike. Again, as before in the garden, Reginald stepped forward to press his attack. The troll backed up a step and reoriented to smash him. The knight didn’t hesitate. Reginald rushed forward through the hip high water as the club smashed down behind him. He spun to the side, using the momentum to hack viciously into the troll’s thigh. Once more Reginald felt his sword partially blunted by the troll’s thick skin. But this time Reginald did hear a satisfying roar of pain from his enemy.

Both combatants pivoted to bring their weapons to bear. This time Reginald was too close to dive clear of another attack. Forced to block, his broadsword absorbed little of the attack’s strength. Reginald’s arm-twisted painfully. The knight was knocked off his feet and into the brackish water. The current dragged Reginald along the bottom. He held his breath and remained submerged beneath Brière’s waters.

The troll’s club slammed the water around Reginald as it sought to finish him. The knight knew breaking the surface meant death. He let the current carry him away from the frenzied creature. When his lungs were nothing more than burning cinders he resurfaced. Reginald dragged his armor-laden body onto a muddy bank. He couldn’t see the troll, but continued to hear it thrashing nearby.

His arm ached as he lifted himself upright. He pounded the mud in frustration. Every time he attacked, the much stronger creature simply swatted him aside. He couldn’t hope to overcome the monster with his sword alone. It was futile. Reginald needed to escape Brière and devise a strategy.

He started walking. It was a cautious retreat away from the troll and further into tendrils of fog and twisted trees. Time passed and Reginald struggled to gain his bearings. His sense of direction had been upset during the battle. The knight was forced to admit he was lost. He heard no sign of pursuit and allowed himself to sag wearily against a tree. Without daylight there was no chance of him finding his way out of the marsh, no matter how badly he wanted to leave.

“Why are you just sitting there?”

Reginald jumped to his feet in surprise. He turned and saw the child Clemence trying to stifle a smile after having startled him again. The smile was completely abandoned as she noticed the furious expression on Reginald’s face.

“What the devil are you doing here?” Reginald demanded.

Clemence shrank back fearfully and answered, “I saw you chase after the monster. I wanted to know what happened.”

“I told you to go home. Your parents are bound to have heard the commotion and will think something has happened to you,” Reginald growled.

A strange look crossed over her face, “They already know, Monsieur.”

Reginald stared at the grubby child in disbelief. Her parents were either helpless degenerates or mad.

“Clemence, I’m going to follow you back to Guérande,” Reginald stated.

The girl looked disappointed, “You aren’t going to fight it again?”

Reginald laughed bitterly, “Oh, no. I’m going to fight that beast again, but not tonight. And not with you underfoot.”

Clemence stamped her foot impatiently and pouted. Eventually she began a sullen march back to the village with Reginald in her wake. Reginald continued to look over his shoulder, half expecting the troll to come barreling out of the woods at them. But no danger presented itself and the marsh gave way to farmland once more. Reginald sighed upon seeing Guérande lights.

“I can go the rest of the way without you, Reginald,” Clemence huffed.

Reginald couldn’t get a word in. He just watched the little girl dash towards the village. The knight kept an eye on her a moment longer – felt somewhat responsible for her safety. She had guided Reginald out of the marsh. When Reginald was certain nothing could intercept Clemence he trekked back to the hermits hut.

Nicholas sat on the porch of his little hut with his eyes closed. He let his heightened senses take in the night. Nicholas smelled the damp earth and listened to the ceaseless chorus of crickets and frogs. Though he missed the Mediterranean, this land wasn’t so bad. His presence here was a mystery, but a subtle change in the atmosphere told him answers were coming tonight.

He opened his eyes and a resigned sigh escaped his lips, “Hello, Bridget.”

She was a luminous being in the night. The old hermit had detected her presence earlier and waited for the angel to appear before him. He was about to learn why he was summoned to Guérande. The answer was not comforting…

Reginald woke up needing to stretch his cramped muscles. The knight literally collapsed and fell into a deep sleep upon returning to the hut. An action Reginald knew to be reckless. He barely knew the strange hermit named Nicholas. Yet the old man had taken care of Reginald. A warm wool blanket lay overtop him, placed over him during the night as he slumbered.

The knight pulled his mail armor up and stared at the bruised flesh of his chest. A dull ache had settled where the troll kicked him. Reginald ran his fingers across his ribs. They didn’t seem to be broken. He couldn’t say the same about his sword. The weapon’s edge was blunted and chipped in places. Damage incurred from blocking the tremendous blows from a giant femur the troll swung so proficiently. Now that Reginald thought about it, he realized the troll possessed genuine fighting prowess. A fact that did not bold well for Reginald.

The knight needed an advantage. If he could not get close to the troll, he needed to attack it from a distance. Somehow incapacitating the powerful creature would help as well. Maybe he could lure the beast into some trap…

Reginald mulled over several tactics in his head as he took a honing stone to the ruined edges of his broadsword. He was lucky. Escaping from such an encounter with his life was more than he had a right to ask for. If it were up to him he would simply leave these wretched peasants to defend their own village. But leaving wasn’t an option.

The knight needed to get a ranged weapon and supplies if he was going to defeat his adversary. First he needed to get back into the village without alerting the local militia. Reginald doubted security by the walls were lax even during the day – not after Andre Laurent and his men got a good look at the troll. Reginald thought about the terrain surrounding the village. The knight looked towards the farmland at the forest’s edge. Perhaps he wouldn’t even need to sneak into the village…