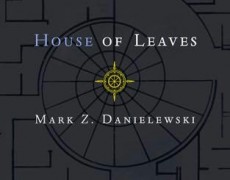 House of Leaves by Mark Z. Danielewski is jarringly unconventional and instills a deep sense of dread within its readers. Through the use of elaborate text arrangement, numerous footnotes, reference of non-existent books, and multiple narrators – Danielewski creates a dark and disorientating tale.

House of Leaves begins with the first-person narration of Johnny Truant. Johnny is a troubled tattoo parlor employee who stumbles upon a manuscript written by a blind, elderly man named Zampano.This turns out to be a written account of a fictional, documentary film called The Navidson Record. Johnny begins to read Zampano’s notes and becomes drawn into the maddening tale. 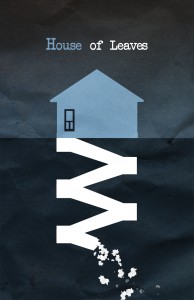 The manuscript describes the Navidson family as they move into a mysterious house in Virginia whose interior exceeds its exterior. This oddity is quickly overshadowed by the sudden appearance of a closet in the family’s living room. A closet that inexplicable expands into tunnels and caverns of utter darkness. This paradox draws members of the Navidson family and others in. Dementia and death shortly follow.

Johnny Truant’s own grip on reality falters as his obsession in completing Zampano’s work takes over his life. The darkness and fear haunting the Navidson’s family soon materializes in his own life when a beast of shadow stalks him. But is this an actual monster? Or is it a figment of Truant’s own mind? As the credibility of Johnny’s narration erodes throughout the story – what can the reader consider real?

Danielewski uses the myth of the Minotaur in the Labyrinth. Is this done to allude to those beings lost within the Navidson home’s inky depths? Is it an allusion to Johnny Truant being lost to the darkness within his own mind? Or is the reader the misshapen creature trapped within the maze of Danielewski’s words? Read the House of Leaves and decide for yourself.