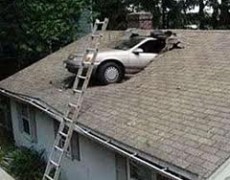 You think I’d be used to it by now. The initial impact of 2,000 pounds worth of steel and polymers colliding violently into the bumper of the car I was driving. It’s still scary. The force of the impact launched me forward as the seatbelt simultaneously restricted further to hold me in place. My head whipped roughly forward and the gray matter of my brain sloshed against sides of my skull while the car settled into place. Everything was foggy as my brain recovered form the lag caused by the collision. And then there was the dawning horror of realization. I’ve been in the third car accident of my life. Elapsed time? Four seconds.

In a daze I pulled off of Keyser Avenue and into the Garrity’s supermarket parking lot. The car was still running. I try to tell myself this was a good sign. No matter how bad it looks at least my little Pontiac Sunfire still functioned. As I stepped out of the car and walked towards the trunk, I saw my automotive assailant pull up beside me. It’s a mammoth of a blue SUV. I can’t tell what exact kind – I only registered its size and color.

I finally get to look at the back on the Sunfire…there’s no damage. Confusion prevented me from being happy. My brain told me I should she a crumpled bumper and the shattered red glass of broken taillights. Nothing. There was barely a scratch.

I hear her talk then. I turn around and the woman who tried to park her small blue tank in my trunk asked me if I’m all right. She’s a short brunette with an accomplished summer tan. Her pretty brown eyes have an “oh my god please don’t sue me look” as she holds her open hand at me to emphasize her anxiety. I reply there’s no damage and ask her if she’s okay too. She replies she’s okay and there’s no damage to her vehicle either.

No one wants to bother with the cops or deal with insurance agencies. Especially if you are lucky enough to escape an accident without having your ride totaled. We both go are separate ways. Pretty brunette girl goes on her way to cause yet another automotive catastrophe and I resumed my commute to work. I wondered why there was coffee spilt all over the place and I dimly remember seeing my black mug being launched skywards from the cup holder. Ah so that explains the mess. I make it to work with no further incident, but there’s a cold certainty in my mind.

God has determined how I will die. This was the third time I’ve been rear ended driving in the Scranton area. Each time the vehicles have grown progressively bigger. I assume the next time some diesel filled semi will plow into me – reducing whatever car I’m driving into a ruinous mass of steel. They’ll need the Jaws of Life to extract my corpse from the wreckage. Then again that’s only if the car doesn’t explode. I think that would be a bit more interesting at least.

Light a candle on my birthday.