James Patterson’s new novel, “Witch and Wizard” is intriguing to me conceptually. The story is based on two siblings named Whit and Wisty Allgood. Average teenagers living with their parents until the day their home is raided by the New Order. The brother and sister are accused of practicing magic by this oppressive new regime of the federal government that has come to power. Under the leadership of “The One Who Is The One”, they seek to imprison and execute all practitioners of magic.

During the course of their imprisonment and eventual escape the teens develop their magic and learn just how pervasive the New Order has become. Though this story is geared more towards a younger audience, it has a very mature theme. It makes me wonder if the author had questioned the direction in which he wanted to take the novel.

To be more specific, Mr. Patterson’s New Order is very similar to another dystopian nightmare, the world ruled by “Big Brother” in George Orwell’s, “1984.” We see the N.O. Party Posters and portraits of “The One Who Is The One” but the characters don’t really reflect on this. What made 1984 so haunting was how Winston would internalize the maddening world around him. 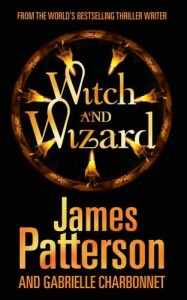 Patterson couldn’t take this novel to that level without alienating some of his young target audience, but I wonder what this story could have been if he had. Instead, Witch and Wizard focused on the conflict between adolescences who use magic and the adults who run this broken world.

I do think this novel does accomplish what it sets out to do. It creates a modern day world where magic exists and uses it as a tool to amplify the discord that can exists between teenagers and adults. Whitford Allgood and his sister Wisty are very benign and likeable characters. I would have liked more scenes with “The One Who Is The One.” I know the full explanation of his character will be revealed in later novels, but having the villain’s (and an adult’s perspective) would have made the story more enjoyable for me. This was a good read for younger readers but has enough storyline to cross over and appeal to those adults who read the Harry Potter series.