“Armageddon’s Children” by Terry Brooks is a memorable novel for many reasons. It’s book one of the Genesis of Shannara series which bridges the Word and Void stories with his Shannara tales. Armageddon’s Children takes place on the decimated North American continent. Under the influence of the Void’s demons, humanity has plunged the world into anarchy and war. 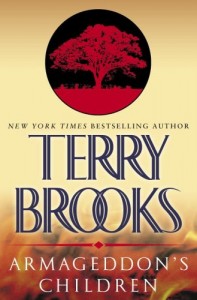 Against this madness stand two Knights of the Word. They are champions chosen by the Word’s Lady to protect what remains of the human race. One will journey to find a being capable of turning the tide against the demons. The other will discover a long lost race of magical beings essential to the survival of humanity.

Throughout this epic, Terry Brook’s describes our fallen world with gripping detail. Landscapes are desolated by pollution and warfare. Gangs of tribal children and hideous mutations stalk the ruins of cities. Sports arenas are converted into fortress like compounds. The people within its walls nearly as cruel as the monsters they seek shelter from. And the main characters are all wonderfully developed and captivating.

Armageddon’s Children is impressive in that it can stand alone. Even while bridging two separate series together – it’s so well written that new readers won’t be lost as the tale unfolds. And those already familiar with Mr. Brooks previous work will enjoy the characters and creations they’ve been introduced to previously.