I was at the local Books-A-Million and came across a copy of “The Book of Alchemy” by Francis Melville. It’s a beautiful little book with a surprising amount of content and quality illustrations. Melville does a wonderful job of recounting the history of alchemy from a practitioners view point. He’s also successful in stressing that Alchemy is transformative of the spirit, as well as substances. 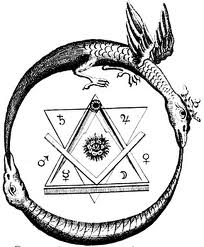 Alchemical Symbolism is given appropriate importance in Melville’s book. The four elements which are so important to alchemy are depicted with classic imagery from works like The Fama Fraternitatis and The Mutus Liber. Alchemy uses symbolism to explain scientific processes and aspects of life. The Ouroboros was used as a representation of the cycle of life. The sun and moon reflect dualities found in nature. 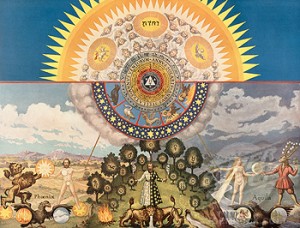 This book also details how the study of alchemy has advanced science. The processes of distillation and fermentation originate from alchemy. Much of modern medicine also derives from alchemy. Herbs such as ginseng, St. John’s wort, and echinacea were
associated with planets. This emphasized the credo of alchemy: “As above, so below.”
Melville then provides us a list of the planets with the various properties and herbs associated with them.

The overall presentation of the book is impressive. Melville touches on the important concepts and figures of Alchemy. Though, the Ripley scroll went without mentioning. Recipes for creating elixirs are listed, but deserved to be expanded on. But for a measly $10.00 you won’t find a better reference or coffee table collectible.