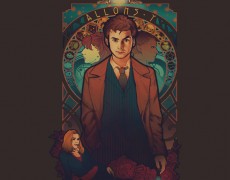 Megan Lara is a freelance artist & designer. She is heavily inspired by popular science fiction and fantasy franchises. At the age of five her parents bought a Super Nintendo Entertainment System. Addiction quickly followed. Ms. Lara grew up on a farm in a rural community in the mid-west, so she gravitated towards video games and related art work.

This interest developed further when she purchased her first Wacom tablet and later attended a community college for studio painting. Currently Megan Lara works as a Cover Artist for Dark Horse Comics. Her creations grace the covers of Joss Whedon’s “Willow: Wonderland” comic series. Megan is also a talented t-shirt designer under the employ of Quantum Mechanix, Inc. 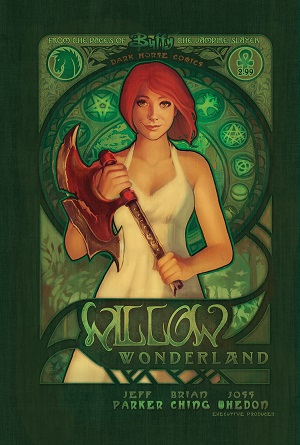 Many of her designs include popular characters from Doctor Who, The Dark Tower, and Nintendo. Ms. Lara’s style is heavily influenced by Alphonse Mucha and Art Nouveau in general. She utilizes a Wacom Cintiq to create the majority of her pieces. When she is not creating art – Megan enjoys baking, traveling, and cosplaying.

One of Megan’s future aspirations is to create character portraits for a new Baldur’s Gate game. She would also like to work on a cover for a Stephen King novel. This is not surprising given her artwork inspired by the Dark Tower series. Ms. Lara is looking forward to putting together an artbooksometime in the future featuring her beautiful work.

You can view more of Megan’s work at her gallery on deviantArt.

You can also purchase her prints on her Society6 page:  http://society6.com/artist/meganlara