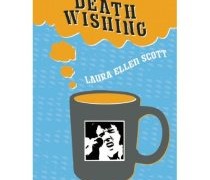 “Death Wishing” by Laura Ellen Scott is an off the wall tale reminiscent of a Coen Brother’s Film. The story focuses on the life of Victor Swaim. Victor is a divorced and disillusioned man living by the French Quarter of New Orleans. He works for his son Val, repairing capes and corsets in a vintage clothing store. His free time is spent lusting after a young woman named Pebbles, while he’s not drinking with his friend Martine. A French Canadian libertine. 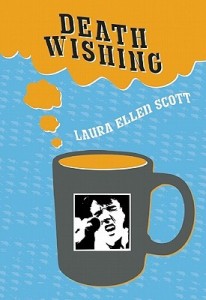 During this time, the Death Wishing phenomenon has gripped the world. The most ardent desires of those confined to their deathbeds become true. With events such as  bottomless cups of coffee, clouds turning orange, and the return of Elvis – humanity finds itself estranged. Already out of sorts, Victor takes to this ever-changing world relatively well.

That is, until Pebbles gets swept up into the ranks of a Death Wishing cult. A group of fanatics trying to influence the dying into making wishes to benefit their organization. While Victor tries to break the influence the cult has over Pebbles, his own life grows increasingly bizarre. Murders begin to take place around the country as Death cults now seek to kill those suspected of being true Death Wishers.

Eventually Victor and his friends become the targets of their attacks. Faced with his increasing mortality, Victor begins to consider what his dying wish should be. Brenda, his viperous ex-wife, even suggests suicide to ensure his wish is completed. But Victor is determined at the very least to rescue Pebbles.  This all leads to a madcap showdown with the cult leader that’s more humorous than suspenseful.

Death Wishing does a great job of capturing the flavor of the south. It faithfully supplies relevant details and mannerisms to its characters. All of which seemed damaged by life in some degree. Very much in line with the dark satire of Chuck Palahniuk, Death Wishing is a great read with an enjoyably ironic twist to its end.