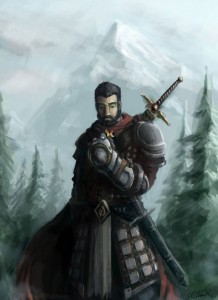 “Will no one rid me of this turbulent priest?”

These words were spoken by King Henry II and interpreted as royal decree. Sir Reginald FitzUrse along with three other knights burst into Canterbury Cathedral. They stormed the hallowed halls to force the Archbishop, Thomas Becket, to agree to the king’s terms.Thomas had refused to sign the Constitutions of Clarendon. Henry’s policies aimed at weakening the clergy and Rome’s authority. This defiance sealed the holy man’s fate.

The four knights had intended to coerce Becket into signing the documents. But the threat of violence became a reality when the righteous Archbishop repudiated their demands. Within the sanctified walls of the Cathedral – Thomas Becket was slain.

Soon after, Catholics throughout Europe venerated Becket as a martyr and his murderers were excommunicated at the hands of Pope Alexander. Their absolution could only be attained once they served a period of 14 years in defense of the holy land. Only three of the knights would honor this penance.

In an attempt to escape his service – Sir Reginald abandoned Jerusalem. This second act of sacrilege ensured the knight’s damnation. Stripped of his grace by an angel, Sir Reginald is now hated by his fellow man and forced to battle dark forces.

Redemption only lies in service. Having rejected his opportunity to makes amends through the Pope; Sir Reginald must now do so directly with God. For 14 years he will battle evil, but if he fails… his soul will be damned to hell.

Part I: The Necromancer