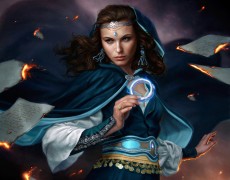 There are few artists with the raw talent of Dan Dos Santos. And that statement is far from hyperbole. One look at his work on “The Fires of Heaven” makes this abundantly clear. Dan’s work is all done with traditional oil paints and his subjects see to spring out from the canvas they’re painted on. Being a fan of “The Wheel of Time” – his depiction of Moiraine Damodred is exactly as I imagined her. 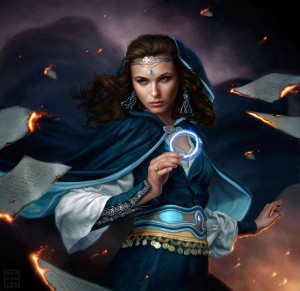 Dan Dos Santos attended the School of Visual Arts from 1996-2000. Having only painted one oil painting before, it was his strong competitive spirit that saw him excel quickly. This was cultivated during his drawing competitions with his big sister. Dan would graduate at the top of his class with a B.F.A. degree in Illustration.

Dan’s art has appeared in many novels, comics, and film. He has worked for clients such as Disney, Universal Studios, Random House, Tor books, UpperDeck, Wizards of the Coast, and DC Comics. He has also won several awards. In 2010 he was awarded the Silver Medal from Spectrum. In 2007 he received the Jack Gaughan Award for Best Emerging Artist. And he was the recipient of the Chesley Award for Best Paperback Cover of 2007.

Dan Dos Santos has a large following on CGHUB as well as deviantArt. Anyone who enjoys traditional oil paintings needs to view his galleries. Being a fan of fantasy is also unnecessary. The quality of Dan’s work can be appreciated by anyone who enjoys art in general.